The far end of the tail of a human sperm has been studied scientifically a bit less than the other parts of the sperm’s structure. A new study suggests that this little chunk is a fairly important part of the sperm’s swimming mechanism. 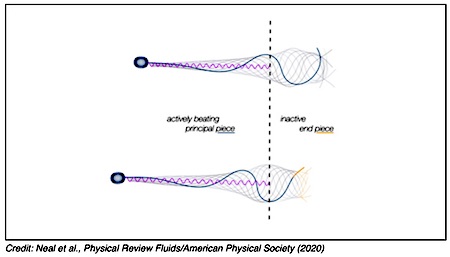 “Spermatozoa self-propel by propagating bending waves along a predominantly active elastic flagellum. The organized structure of the “9 + 2’’ axoneme is lost in the most-distal few microns of the flagellum, and therefore this region is unlikely to have the ability to generate active bending; as such it has been largely neglected in biophysical studies. Through elastohydrodynamic modeling of human-like sperm we show that an inactive distal region confers significant advantages, both in propulsive thrust and swimming efficiency, when compared with a fully active flagellum of the same total length.”