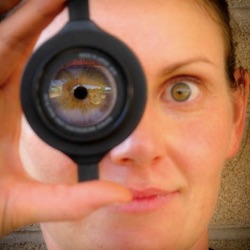 Ig Nobel Prize-winning scientists who discovered that dung beetles use the Milky Way to navigate have now learned (together with some colleagues) how certain bees probably manage to tamp down traffic congestion. Their study is:

“Accelerated Landing in a Stingless Bee and Its Unexpected Benefits for Traffic Congestion,” Pierre Tichit, Isabel Alves-dos-Santos, Marie Dacke and Emily Baird [pictured here], Proceedings of the Royal Academy B: Biological Sciences, epub 2020. (Thanks to Tony Tweedale for bringing this to our attention.) The authors report:

“we recorded the stingless bees Scaptotrigona depilis landing on their natural hive entrance—a narrow wax tube built by the bees themselves. Rather than decelerating before touchdown as most animals do, S. depilis accelerates in preparation for its high precision landings on the narrow tube of wax. A simulation of traffic at the hive suggests that this counterintuitive landing strategy could confer a collective advantage to the colony by minimizing the risk of mid-air collisions and thus of traffic congestion. If the simulated size of the hive entrance increases and if traffic intensity decreases relative to the measured real-world values, ‘accelerated landing’ ceases to provide a clear benefit, suggesting that it is only a useful strategy when target cross-section is small and landing traffic is high.”

The 2013 Ig Nobel Prize for biology & astronomy was awarded to Marie Dacke, Emily Baird, Marcus Byrne, Clarke Scholtz, and Eric J. Warrant, for discovering that when dung beetles get lost, they can navigate their way home by looking at the Milky Way.

Emily Baird was scheduled to appear in two Ig Nobel shows in Stockholm, on Monday and Tuesday, April 20 and 21. You might have been able to enjoy coming to either of those shows, and asking about the bee landing discovery, as well as the dung beetles, had those shows not been postponed because of the COVID-19 pandemic.