Some professionals—professionals who professionally calculate a date on which the world will end—have calculated that the COVID-19 pandemic is not a goodbye-everyone harbinger. The Washington Post reports, on March 17, 2020: 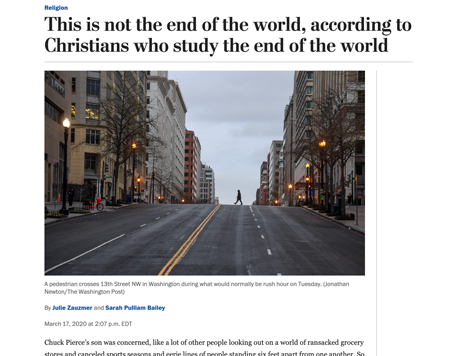 The worldwide upheaval caused by the fast-spreading novel coronavirus pandemic has many people reaching for their Bibles, and some starting to wonder: Could this be a sign of the apocalypse?

It sure might feel apocalyptic. But not if you ask Christian writers and pastors who have spent years focusing their message on the Book of Revelation — the New Testament’s final book…. Most of these Revelation-focused prophesiers don’t see coronavirus as heralding the Second Coming and the end of life on Earth as we know it….

A Prize-Winning History for the Profession