The Wikipedia entry for the Madman Theory informs :

“The madman theory is a political theory commonly associated with U.S. President Richard Nixon’s foreign policy. He and his administration tried to make the leaders of hostile Communist Bloc nations think Nixon was irrational and volatile. According to the theory, those leaders would then avoid provoking the United States, fearing an unpredictable American response.”

The theory, however, has not, until now, been empirically ‘tested’ in a ‘large-N’ context (that’s to say with a large number of leaders who were, or are, regarded, by some, at least in part, as ‘mad’).

A new article in the British Journal of Political Science, from Professor Roseanne McManus at Penn State University, US, examines the Madman Theory in some depth.

“This article offers the first large-N test of this theory. The author introduces an original perception-based measure of leaders’ reputations for madness, coded based on news reports, and analyzes its effect on both general deterrence and crisis bargaining. The study also tests several hypotheses about the conditions under which perceived madness is expected to be more or less helpful. The author finds that perceived madness is harmful to general deterrence and is sometimes also harmful in crisis bargaining, but may be helpful in crisis bargaining under certain conditions. The analysis suggests that the harmful effect of perceived madness results from a commitment problem.”

Here is a partial view of a table from the article showing leaders most frequently coded as having madness reputations : 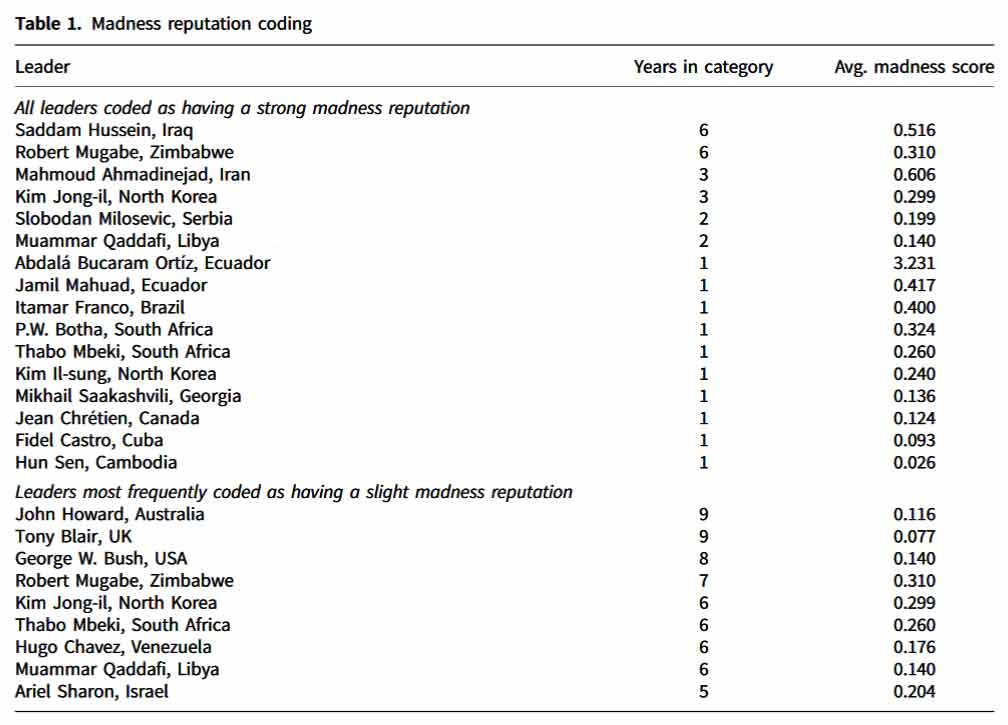 See : Crazy Like a Fox? Are Leaders with Reputations for Madness More Successful at International Coercion?

UPDATE: At the request of Professor McManus, we have changed the accompanying table to include the list of leaders with strong madness reputations (the previously published table only showed those with slight madness reputations).

The professor explains why this change is important :