What shape does an earthworm take if someone vibrates the worm? Arnaud Hemmerle alerts us to an experimental attempt to find out. 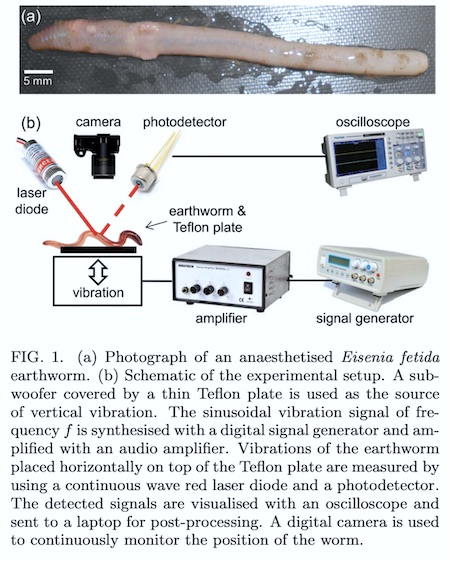 A few words about this wonderful paper, which tackles a deep and puzzling question: what is the shape of a vibrated earthworm?

Back in 2015, we published a paper entitled “Worm-like instability of a vibrated sessile drop“, in which we studied the shape of a vibrated liquid drop and a particular hydrodynamic instability. It turns out that the drop elongates for a certain range of frequencies and amplitudes, and takes a shape close to what an earthworm looks like. Until then, nothing very funny, I have to admit.

But it seems that Maksymov and Pototsky read our paper and thought: “Ok, fine, a vibrated drop may look like a worm … BUT WHAT ABOUT A REAL EARTHWORM???”

And it turns out that a vibrated earthworm (sedated first with ethanol, of course) shows some kind of sub-harmonic oscillations, similar in a way to what has been seen on vibrated liquid droplets.

The paper makes you laugh, and then think. They actually modeled the vibrated earthworm as an elastic cylinder, and the theoretical model seems to fit the observations. Oh and of course they have also built an earthworm mimicking phantom made of a finger of a latex glove filled with water. Because why not.

I do not know personally anyone involved in this paper, including the worms.

Biological cells and many living organisms are mostly made of liquids and therefore, by analogy with liquid drops, they should exhibit a range of fundamental nonlinear phenomena such as the onset of standing surface waves. Here, we test four common species of earthworm to demonstrate that vertical vibration of living worms lying horizontally of a flat solid surface results in the onset of subharmonic Faraday-like body waves, which is possible because earthworms have a hydrostatic skeleton with a flexible skin and a liquid-filled body cavity. Our findings are supported by theoretical analysis based on a model of parametrically excited vibrations in liquid-filled elastic cylinders using material parameters of the worm’s body reported in the literature.