This insect-sex-reversal-centric profile of 2017 Ig Nobel Biology Prize co-winner Yoshitaka Kamimura appeared a year ago in the Keio Times: 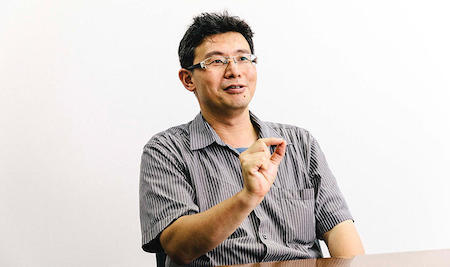 …In 2012, Prof. Kamimura was first invited to join a research team led by Kazunori Yoshizawa, an associate professor at Hokkaido University, whose award-winning research focuses on cave-dwelling species of insect from Brazil that belongs to the genus Neotrogla. In most insects, the male penetrates the female reproductive organ to transfer seminal fluid, but for Neotrogla, it is the female that has a penis, which it uses to penetrate the male in order to receive seminal fluid and nutritional substances.

“Neotrogla are small, 3mm-long insects that inhabit caves in Brazil. Our first face-to-face encounter with these fascinating creatures was in 2016, when we donned headlamps and explored the caves in search of them. The caves they inhabit are quite dry and food is scarce, which forces them to rely on bat guano and mouse droppings to survive….”