A new review study creeps and leaps upon a physiological resemblance of cats and humans.

The study is: “We Are Upright-Walking Cats: Human Limbs as Sensory Antennae During Locomotion,” Gregory E.P. Pearcey and E. Paul Zehr, Physiology, epub 2019. 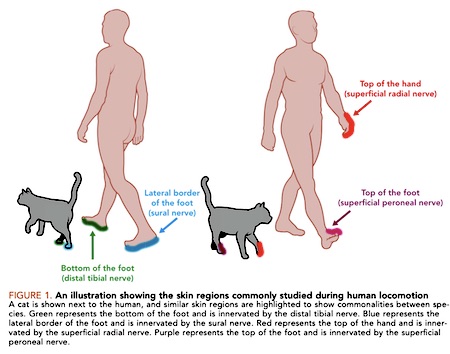 “Humans and cats share many characteristics pertaining to the neural control of locomotion, which has enabled the comprehensive study of cutaneous feedback during locomotion. Feedback from discrete skin regions on both surfaces of the human foot has revealed that neuromechanical responses are highly topographically organized and contribute to ‘sensory guidance’ of our limbs during locomotion.”

BONUS (perhaps distantly related): The 2017 Ig Nobel Prize for physics was awarded to Marc-Antoine Fardin, for using fluid dynamics to probe the question “Can a Cat Be Both a Solid and a Liquid?” Details of that research are in the study “On the Rheology of Cats,” Marc-Antoine Fardin, Rheology Bulletin, vol. 83, 2, July 2014, pp. 16-17 and 30.