What power over the minds of humans lurks in bug-human-hybrid superhero movies? One study, at least, asks that question. 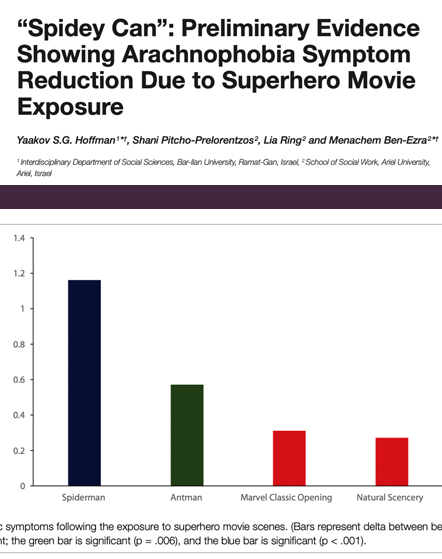 “Fear of insects, mainly spiders, is considered one of the most common insect phobias. However, to date, no conducted studies have examined the effects of phobic stimulus exposure (spiders/ants) within the positive context of superhero movies, such as Spider-Man or Ant-Man. A convenience sample of 424 participants divided into four groups watched different clips. Two intervention groups (Spider-Man/Ant-Man) and two control groups (Marvel opening/natural scene) were measured twice (pre–post intervention)…. Reduction in phobic symptoms was significant in the Spider-Man and Ant-Man groups in comparison to the control groups. Seven-second exposure to insect-specific stimuli within a positive context reduces the level of phobic symptoms.”