The 25th First Annual Ig Nobel Prize ceremony, in the year 2015, was extra-memorable. Diane Kelly, reporting for Gizmodo, explained why: 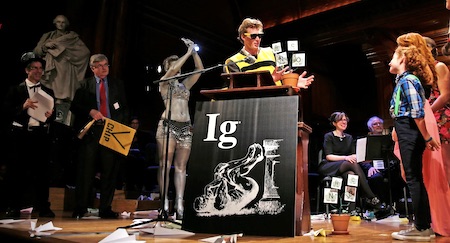 For years, the Ig Nobel Awards have been famous for celebrating the most offbeat and ludicrous forms of scientific discovery. And last night, I was lucky enough to attend the 2015 Ig Nobel ceremony, because a friend was the proud winner of an Ig Nobel.

This year was the 25th First Annual Ig Nobel Prize Ceremony, and everyone agreed this was a Very Big Deal. And even though the organizers insisted that this year’s theme, “LIFE,” was not necessarily connected to any of the achievements that were being honored with this year’s prize, a few of the award recipients nevertheless had something to do with biological life. Including sex.

But before the winners were announced, first there were traditions to uphold. The deluge of paper airplanes (in which I managed to nail the announcer with my plane–sorry about that). The “Welcome, welcome” speech, delivered by the very tall Bill Hoston and the height-challenged Jean Berko Gleason. The parade of the new Ig Nobel winners and real Nobel Laureates.

One special treat was a public reunion of all of the young women who have performed the official role of “Miss Sweetie-Poo” for the awards ceremony. Miss Sweetie-Poo is the Ig Nobel timekeeper. If any of the award-acceptance speeches go on too long, an adorable eight-year-old girl marches up to the podium and loudly repeats “Please stop. I’m bored!” until they stop talking….

Here’s recorded video of that ceremony: