This report from Virunga National Park appears to broaden and confirm the Ig Nobel Prize-winning discovery about different kinds of animals (humans and some of our close relatives) imitating each other: 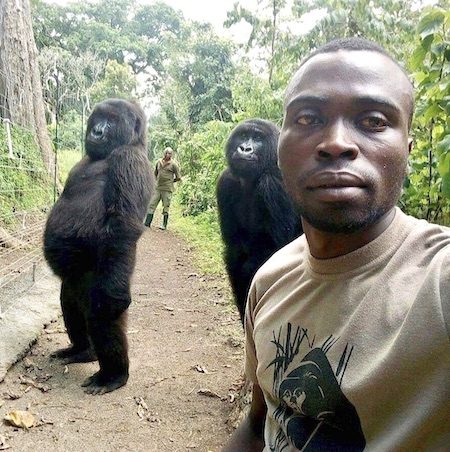 You might have recently seen caretakers Mathieu and Patrick’s amazing selfie with female orphaned gorillas Ndakazi and Ndeze inside the Senkwekwe center at Virunga National Park. We’ve received dozens of messages about the photo. YES, it’s real! Those gorilla gals are always acting cheeky so this was the perfect shot of their true personalities! Also, it’s no surprise to see these girls on their two feet either—most primates are comfortable walking upright (bipedalism) for short bursts of time….
Conserving Virunga’s amazing wildlife is a constant challenge for the Park and our work wouldn’t be possible without your support.

The photo has appeared in numerous press accounts, including a BBC report with the headline “Gorillas pose for selfie with DR Congo anti-poaching unit“.

The 2018 Ig Nobel Prize for anthropology was awarded to Tomas Persson, Gabriela-Alina Sauciuc, and Elainie Madsen, for collecting evidence, in a zoo, that chimpanzees imitate humans about as often, and about as well, as humans imitate chimpanzees.

They documented their research, in the study “Spontaneous Cross-Species Imitation in Interaction Between Chimpanzees and Zoo Visitors,” Tomas Persson, Gabriela-Alina Sauciuc, and Elainie Madsen, Primates, vol. 59, no. 1, January 2018, pp. 19–29.

(Thanks to Bruce Petschek for alerting us to this.)