Tuesday evening, the Ig Nobel EuroTour arrives at École Polytechnique Fédérale de Lausanne—featuring Cats and Locusts and Star Wars and ‘Huh?’ and Claire and Mark and Marc and Marc: 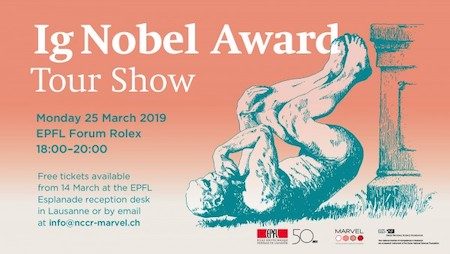 UPDATE: Mark Dingemanse was trapped in the Amsterdam airport, where heavy winds led to the shutdown of nearly all flights for a substantial part of the day. So no  Mark at the show in Lausanne, only Marc and Marc, and of course Claire. Pierre Barthélémy valiantly stepped into the breach, and gave an impromptu talk (in French) about some of his most treasured improbable research discoveries.

After that, the Ig Nobel EuroTour will move on to The Netherlands, Poland, Italy, Sweden, Norway, Germany, and Italy (again).