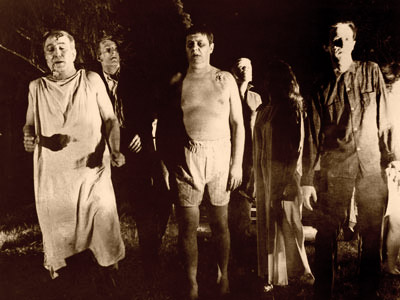 An article in the Journal of Neuroscience Nursing, February 2019, Volume :51 Number 1, discusses the question of evidence in assessing traumatic brain injuries (TBI) by using the example of Zombies.

“Despite anecdotal evidence seen on television and in movies, there is zero actual research to support penetrating traumatic brain injury (TBI) as an intervention to kill zombies (eg, walkers). For the moment, we shall dispense with the obvious conundrum that one cannot kill (end the life of) someone or something that is already dead. Rather, we shall focus on the concept of evidence.”

“Again, it can be noted that there are difficulties involved with evidence collection regarding the issue of the definition of death on a nonliving being. Perhaps, the limitation is that this is not an intervention with adequate preclinical data, or perhaps the theory is flawed. Because of the lack of research data, the only evidence available is expert opinion. Thus, we conclude that, if we were attacked by a horde of walkers, our best evidence-based practice option would be to use a skull-penetration intervention (class of evidence, level IIB; strength of recommendation, level C).”

It can be read, in full, here : Of Zombies and Evidence