This young man who swallowed a fish
As part of a party tradish-
ion he followed with friends:
Unhappy? Depends.
The young man has gotten his wish.

That limerick is a hasty summary of the medical case described in this newly published study:

Inspired by Jackass (a tv-show about self-injuring stunts), some friends topped off a drinking party with live fishes from their aquarium. After the goldfishes had gone down smoothly, a bronze catfish was ingested. Unaware of the morphology and anti-predator behaviour of this species, a healthy but intoxicated 28-year-old man got a surprise. The catfish erected and locked the spines of its pectoral fins and got lodged in the hypopharynx. After several hours, he presented himself at the emergency department with dysphonia and dysphagia. The fish had to be removed endoscopically. Intubation and admittance to the intensive care unit was necessary due to laryngeal oedema. Two weeks postoperatively, the patient made a full recovery and donated the fish to the Natural History Museum Rotterdam. The publicity generated by public exhibition of the ‘do-not-swallow-fish’ emphasised the official Jackass warning: ‘.. do not attempt any of the stunts you’re about to see’.

The study included hospital-taken photos and video. (The published report does not, alas, include something that it does explicitly mention: a “two-minute home video” of the patient swallowing the fish, with accompanying encouragement from buddies). 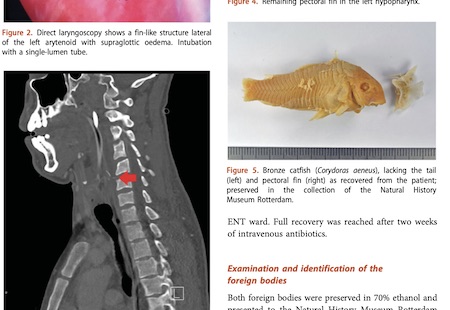 Every doctor who was called in to help with the case ended up as a co-author of this study. Another co-author, C.W. (Kees) Moeliker, is the Ig Nobel Prize-winning discoverer of homosexual necrophilia in the mallard duck, and is also director of the Natural History Museum in Rotterdam. A few years ago the museum hosted the first public medical discussion of this case, a discussion that has now matured to become this study.

Among the knowledge sources cited in this paper, one stands out: “Cleese J, Crichton C. A fish called Wanda. Beverly Hills (CA): Metro-Goldwyn-Mayer Production; 1988.” The young man who swallowed the fish was inspired by this scene from the movie: