It was back in 1994 that Dr William Peterman (then at the University of Illinois at Chicago) mooted the idea of ‘Quantum Geography’ (QG) with an article for the journal The Professional Geographer, Volume 46, 1994 – Issue 1, entitled : ‘Quantum Theory and Geography: What Can Dr. Bertlmann Teach Us’. Dr. Peterman examined the possibilities of attaining objectivity in “quantum-diffracted social sciences” suggesting that :

“By exploring the implications of modern physics, geographers may be able to develop better ways of describing and understanding social space and to incorporate meaning and values as important dimensions.”

The “Dr. Bertlmann” [see Fig. 1] cited in the title had been thrown into the limelight 13 years earlier by the world-renowned particle physicis  John Stewart Bell FRS of CERN, in his paper for Journal de Physique Colloques, 1981, 42 (C2), pp.C2-41-C2-62, BERTLMANN’S SOCKS AND THE NATURE OF REALITY. 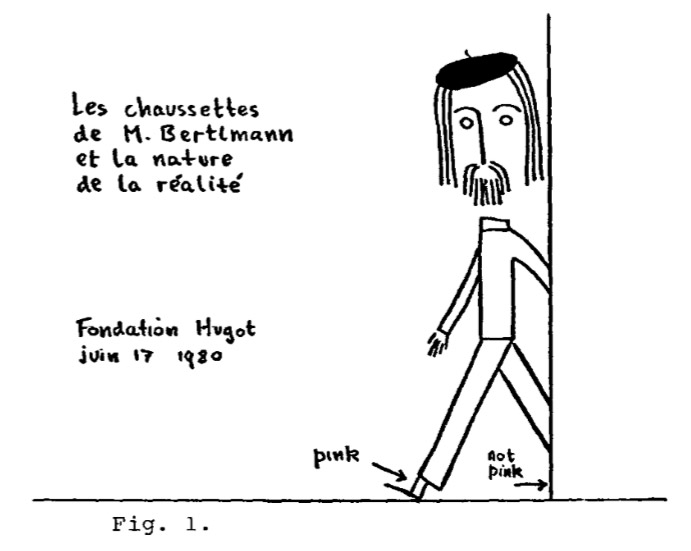 “The case of Bertlmann’s socks is often cited. Dr. Bertlmann likes to wear two socks of different colours. Which colour he will have on a given foot on a given day is quite unpredictable. But when you see (Fig. 1) that the first sock is pink you can be already sure that the second sock will not be pink. Observation of the first, and experience of Bertlmann, gives immediate information about the second.”

It’s fair to say that since the introduction of the Quantum Geography concept in 1994, the flow of academic papers devoted to the subject could be described, at best, as a trickle. A factor that may have been responsible for prompting a critical review, in 2016, by Dr. Thomas S J Smith, of the University of St Andrews, Scotland, who tracked Quantum Geography’s progress, asking : ‘What ever happened to quantum geography? Toward a new qualified naturalism‘  (in Geoforum, Volume 71, Pages 5-8)

“Geographers have long been aware that spatial imaginaries matter and these developments are thus concluded to be of profound interest, not least with implications for key reconceptualisations of subjectivity, consciousness, objectivity, space, time and causality. It is put forward that the implications of quantum research may well provide fertile ground for engagement with qualified naturalism, and new, explicitly post-classical spatial imaginaries.”

UPDATE: Since the publication of ‘What ever happened to quantum geography?’ A new paper on the subject has been published – hinting not just at its resurgence, but its re-invention.

Professor Thomas Bittner of the Departments of Philosophy and Geography, State University of New York, Buﬀalo, US, is the author of ‘Towards a Quantum Theory of Geographic Fields‘

“The non-commutative nature of certain operations is the hallmark of Quantum Mechanics. For example, Heisenberg’s uncertainty principle is a consequence of the noncommutativity of operators that determine the position and the momentum of a particle. It is the aim of this paper to present an adequate theory of geographic ﬁelds by applying ideas and techniques from quantum mechanics to geographic ﬁelds. This set of ideas and techniques applied to geographic phenomena will be called Quantum Geography (QG).”

Which, the author says, will allow for “ ontological vagueness” – which could be applicable to the study of geographic fields.