The Holy Grail Re-Redux: Notes of a Retiring Grail Watcher 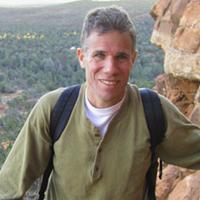 Boys of my generation were encouraged to have a hobby. Some of my peers took up coin and stamp collecting; others caught butterflies and beetles, hoarded baseball cards and comic books, or built model ships and planes. I chose a rather unusual pastime—combing the popular and technical literature for references to the holy grail in various contexts, scientific and otherwise. I was excited to take part in the celebrated hunt for a long-sought prize, carried out in bygone days by legendary actors—the Knights of Columbus, the Masonic Knights Templar, and other fraternal orders. If only I could gather enough clues, I surmised, maybe I could be the one to find the treasure and thereby make my mark in history. This, indeed, was the stuff of dreams.

My mother regularly complained about the box of newspaper and magazine clippings I left in the family room, the contents of which I often spread on the rug while watching episodes of “Gunsmoke,” “Bonanza,” and other popular shows of that era. “Why don’t you get a real hobby?” she sometimes asked. My father, meanwhile, was disappointed when I didn’t want to play horseshoes or toss the baseball with him, opting instead to grab my scissors and back issues of Time, Life, Popular Science, and Popular Mechanics in order to make incremental additions to my burgeoning holy grail scrapbook.

It was painstaking work, but I justified it—to myself and others—by paraphrasing John F. Kennedy’s famous remarks: “We choose to search for the grail, and do other things, not because they are easy but because they are hard—because that goal will serve to organize and measure the best of our energies and skills, because that challenge is one that we are willing to accept, one we are unwilling to postpone, and one which we intend to win.” That speech was effective in silencing most critics, as well as in motivating me.

The pursuit of the grail was a major preoccupation that kept me from being popular in school and from being an honors student. I never engaged in graduate studies, or got a law or medical degree, as did many of my high school and college classmates, but I also never wavered from my chosen path. I accepted the challenge, as JFK said. I would not postpone it, and I was determined to win, even though I didn’t really know what winning meant or looked like in this venture.

My grail quest was a lonely one for many years, carried out briefly in the family room and soon in the backyard shed (where my father placed my box and scrapbook), then to my college dorm room, my bedroom in a Cambridge house share, and eventually in an alcove in my own home dedicated to all things grail. It was not until 1995 that the editor of a prestigious journal took an interest in my labors and asked me to write a feature-length article that summarized my efforts in this grand enterprise. That turned out to be, in the eyes of many observers, my seminal piece, “In Search of the Holy Grail,” followed half a decade later by another classic of the genre, “The Holy Grail Redux,” and five years hence by “In Search of Astronomy’s Holy Grail,” plus the equally memorable companion piece, “Deconstructing Astronomy’s Holy Grail.”

A talk I gave at the AAAS 2008 Annual Meeting in Boston, “My Search for the Holy Grail,” was arguably the high point of my career. I recounted my adventures to an audience of hundreds that filled one-and-a-half ballrooms, and could easily have filled two ballrooms had the back portion of the room not been reserved for tango lessons—an exercise, in my estimation, of dubious scientific value. A year later, I collaborated with a younger grail investigator—a scholar of great promise who has since abandoned the calling—on what turned out, until today, to be my last printed words on the subject, “A Crusade Against the Quest for the Holy Grail.” 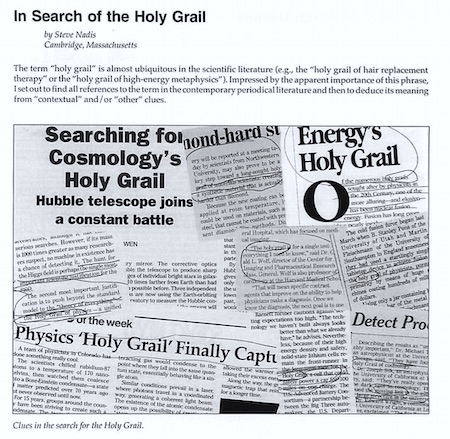 Since then, I’ve been asked to give further talks, as well as to publish my latest findings—all of which I’ve politely declined. But I now believe that an explanation is in order. Simply put, I am retiring from the grail hunt, in part because I have reached the standard retirement age, though there is an even more compelling reason. And pardon me if I, once again, invoke the spirit, if not the exact phraseology, of the late President Kennedy: I am giving up the hunt not because it is too hard for someone of my age, but rather because it is too easy.

In the old days, I used to read voraciously, plowing through stacks of periodicals for the fleeting grail reference. I would cut out articles and paste them into my ledger. There was a whole network of grail searchers scattered around the world who would pass on interesting tidbits to me by mail, sometimes ringing by phone (collect, generally, which often proved to be a costly indulgence) so that I could hear and transcribe the words immediately, rather than wait for our postal service to reach my remote dwelling.

Nowadays, the thrill is gone, and much of the blame goes to Google. We’ve entered the age of “Big Data” and informatics, where the quirks and nuances of my field are rapidly disappearing as number crunching and analytics take the place of good old-fashioned detective work.

Allow me to illustrate: Five long years passed between the publication of “The Holy Grail Redux” and “In Search of Astronomy’s Holy Grail” and “Deconstructing Astronomy’s Holy Grail”—years filled with research and relentless digging, fueled by a passion to bring long-buried facts to life. But now I can use my browser to search on “the holy grail of astronomy” and instantly get 11,100 entries (two of the first eight being my aforementioned articles!). Yes, I can obtain 11,100 leads, 11,100 pieces of evidence, within a fraction of a second, and where’s the sport in that? Like shooting a barrel in fish, as my uncle Harold used to say. Put in other terms, skilled professionals like me are no longer needed because everyone can, with a few keystrokes, carry out grail searches of their own. I suppose that could be called progress—the democratization of a formerly arcane mission—though I’m mindful of the potential pitfalls such as the diminution of standards and erosion of rigor, to mention a few…

So, you might be wondering, what have I learned from this undertaking? One goal of the endeavor was to document the use and misuse of the term “holy grail,” as well as to see how the term’s definition has evolved (or devolved) over time.

It should be clear from the foregoing that the holy grail, in current parlance, is not a single, fixed object such as a magical cup or platter that a reader of this article is likely to pick up in his or her hands and proudly display to the world. It is, instead, a more malleable, abstract, and elusive concept—one that is constantly shifting and diversifying, perhaps representing the diversification of contemporary society. I now believe, some decades into the game, that no matter how hard people search, they are never going to find the holy grail in a definitive, absolute sense. Today it stands for something just out of reach, something to be strived for. And if someone lays claim to a specific grail, a claim that may well be contested, other grails will surely emerge—that one replaced by many, inspiring us to push forward, just as I have been inspired for numerous decades.

In my retirement days, which loom ahead, I won’t be trading in all that excitement for a round or two of golf. But I might enjoy the occasional game of whist or cribbage, played next to a fireplace, in a recess of which stands a goblet that can and in fact has been traced back to the Last Supper.

BONUS: Here’s video of another grail hunter, giving “A Seminar On The Holy Grail Of Particle Physics”: