We have only just now seen news of the 2017 wedding of the manager of the Spam Museum. We offer our heartiest, most tasteful congratulations.

Why this matters to us: The 1992 Ig Nobel Prize for nutrition was awarded to the utilizers of Spam, courageous consumers of canned comestibles, for 54 years of undiscriminating digestion. 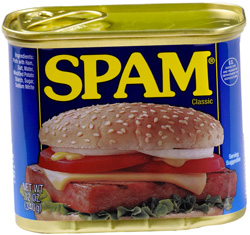 The Rev. James R. Harlan, rector, was celebrant for the double-ring ceremony, which took place at The Episcopal Church of Bethesda-by-the-Sea.

Harold Pysher was the organist.

The bride is the daughter of Eleanor Louise De Peverel Collins Lord of Palm Beach and Dr. Jerome Edmund Lord of Boynton Beach and Washington, D.C.

The bridegroom is the son of Mr. and Mrs. Kenneth Lowell Johnson of Barnesville, Minn.

The bride wore an off-the-shoulder vintage satin and beaded gown with a 10-foot train and an organza veil. She was attended by sister Wallis Jennings dePantulf Lord-Hart of Milton Keynes, England, and sister-in-law Maria Yip Lord of New York as matrons of honor; and her sisters, Stavely Hampston deHodnet Lord of Washington, D.C., and Dorian Warfield d’Amours Lord of Minneapolis as maids of honor.

Ella Louise FitzWarin Lord-Hart, niece of the bride, was the flower girl.

The bride, who will be known professionally by her maiden name, is a graduate of The Fay School and Miss Porter’s School. She attended Mount Holyoke College and graduated from Georgetown University with a bachelor’s degree in American government.

[The bride] was presented to society at the Infirmary Ball in New York, the Batchelor’s Cotillon in Baltimore, Queen Charlotte’s Ball in London, and the Opera Ball in Vienna, Austria.

She is descended from the English baron Foulques FitzWarin, who was at the Magna Carta and is the subject of the famous 13th-century manuscript The Romance of Fulques Fitzwarenne; and of his father, Guarin de Metz, the Lorraine noble who won the famous tournament at Whittington Castle in Shropshire, England.

She is a member of the DAR, the Daughters of the Colonial Wars, the Society of the Friends of St. George’s and the Descendants of the Knights of the Garter, and of the Metropolitan Club in Washington, D.C….

The bride is manager of the SPAM® Museum in Austin, Minn., and community relations at Hormel Foods.

The bridegroom, a second lieutenant in the Civil Air patrol and a member of Mensa International, is director of Customized Training, Business Solutions and Entrepreneurship at Riverland Community College in Minnesota.

BONUS INFO: This was the first Spam-or-spam-related Ig Nobel Prize. The next came five years later. The 1997 Ig Nobel Prize for communications was awarded to Sanford [“Spamford”] Wallace, president of Cyber Promotions of Philadelphia—neither rain nor sleet nor dark of night have stayed this self-appointed courier from delivering electronic junk mail to all the world. The next came in 2005, when the Ig Nobel Literature Prize was awarded to The Internet entrepreneurs of Nigeria, for creating and then using e-mail to distribute a bold series of short stories, thus introducing millions of readers to a cast of rich characters—General Sani Abacha, Mrs. Mariam Sanni Abacha, Barrister Jon A Mbeki Esq., and others—each of whom requires just a small amount of expense money so as to obtain access to the great wealth to which they are entitled and which they would like to share with the kind person who assists them.