BREAKING NEWS! WITH A SURPRISING TWIST!

Spaghetti—dry spaghetti—again feeds the intellectual fervor of physicists. Five physicists serve up a surprising new study about an old question about bending a strand past its breaking point:

The authors, at Cornell University, the Massachusetts Institute of Technology, Université Aix Marseille, and the  eCNRS/MIT/AMU Joint Laboratory, build upon an Ig Nobel Physics Prize-winning study [“Fragmentation of Rods by Cascading Cracks: Why Spaghetti Does Not Break in Half,” Basile Audoly and Sebastien Neukirch, Physical Review Letters, vol. 95, no. 9, August 26, 2005, pp. 95505-1 to 95505-1].

Heisser and colleagues describe how—by twisting, as well as bending—they induce a strand of dried spaghetti to break into only two (not more than two!) pieces: 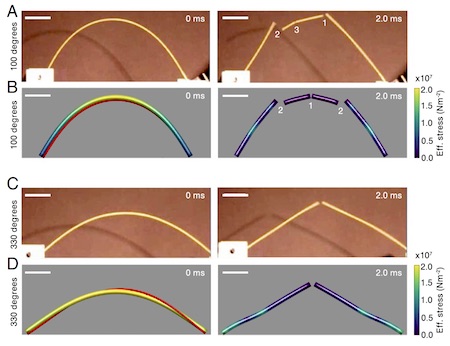 A well-known problem with direct implications for the fracture behavior of elongated brittle objects, such as vaulting poles or long fibers, goes back to the famous physicist Richard Feynman who observed that dry spaghetti almost always breaks into three or more pieces when exposed to large bending stresses. While bending-induced fracture is fairly well understood nowadays, much less is known about the effects of twist. Our experimental and theoretical results demonstrate that twisting enables remarkable fracture control by using the different propagation speeds of twist and bending waves.

(Thanks to Dan Cohen for bringing this to our attention.)

BONUS: Phys.org provides a few additional details, and a photograph of spaghetti.