Toads, some of them, are capable of dramatic action. Here are two examples, one old, one not so old, from the scientific literature. 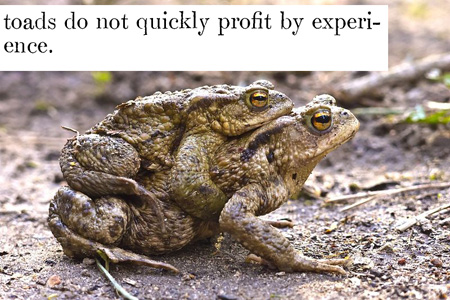 There were many interesting things observed during the experiments. For one thing the males as well as the females responded to the call, which they could locate very accurately. At the beginning of an experiment, as soon as the males were put down they began to scatter in all directions, swimming excitedly about, now this way, now that. When there were twelve unattached males within four or five feet, a call by one of their number would bring the others from all directions, and in a second or two there would. be one or two heaps of clasping, fighting, kicking males, squealing like mice, and rolling over and over….

From these observations I conclude that both male and female toads can hear and locate in space the call of the male; that the response is unintelligent and mechanical; that to the sound of the mating call a motor response is given, which serves to bring the sexes to the same place; that motion is the stimulus which starts the clasping reflex; that neither sex is able to recognize the other without actual contact; that toads do not quickly profit by experience.

Toads Rolling Downhill From a Tarantula

Some toads form a ball and roll downhill when attacked by a tarantula, at least sometimes, suggests this brief BBC video:

(Thanks to Laura Bassett for bringing the rolling toad to our attention.)