Neil Gussman, who wrangles reporters at the Ig Nobel Prize ceremony, bicycled 400 miles, from Pennsylvania to Massachusetts, to come to an Ig Nobel organizers summer barbecue. Today he blogged about this social side of Ig Nobel organizing:

Riding 400 Miles to a Picnic 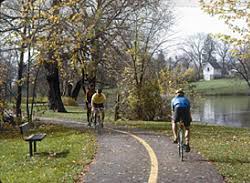 …When I arrived, most of the people at the picnic were gathered around the piano in the basement.  Each Ig Nobel Prize ceremony since 1996 includes a comic opera that starts and stops and starts again between the awarding of the prizes.  This year will be the premiere of “The Broken Heart Opera.” Leading the practice for this year’s opera was Maria Ferrante, the director, and an accomplished soprano who has performed in Grand Operas….

At the piano were two young players, Ivan Gusev from Kazakstan and Yulia Yun from Uzbekistan.  They sat together, one playing, then the other, and sometimes they played four handed.  They were fun to watch, both as brilliant musicians and the way they interacted as they played.  At one point they played “Sheikh of Araby”. Ivan and Yulia played their parts sometimes reaching across each other. At one point Ivan reached too far and Yulia pushed him off the left side of the bench. Ivan rolled onto the floor, and quickly got back onto the piano bench….

Next we moved to the patio, where I met John Barrett. He has been the referee of the Ig Nobel Prize Ceremony for more than twenty years.  John keeps time, making sure the 24/7 Lectures, 24-second talk followed by a 7-second summary, do not go over time….

The Ig Nobel Prize ceremony is held every year in Sanders Theater on the campus of Harvard University.  This year’s ceremony will be held at 6 p.m.  September 13, and webcast live. Since the first ceremony in 1991, the event always occurs before the awarding of the Nobel Prizes. The ceremony gets press coverage in countries around the world, especially those that are home to Ig Nobel (and Nobel) Prize winners….

Every year one or more US-based TV crews from Japanese TV stations show up.  Crews from France and Russia are also annual attendees.  One of my volunteer jobs for the past seven years has been to keep the Russian crew from Первый Канал(Channel One) within the limits for press people….