The prize-winning researchers who discovered why white-haired horses are the most horsefly-proof horses has now probed a classic mystery about zebra stripes. They published this report: “Experimental Evidence That Stripes Do Not Cool Zebras,” Gábor Horváth, Ádám Pereszlényi, Dénes Száz, András Barta, Imre M. Jánosi, Balázs Gerics, and Susanne Åkesson, Scentific Reports, vol. 8, no. 9351, 2018. The authors explain what they did, and what they reasoned from it:

“There are as many as 18 theories for the possible functions of the stripes of zebras, one of which is to cool the animal. We performed field experiments and thermographic measurements to investigate whether thermoregulation might work for zebra-striped bodies. 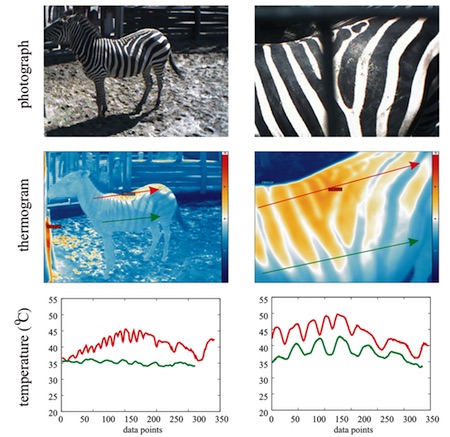 “A zebra body was modeled by water-filled metal barrels covered with horse, cattle and zebra hides and with various black, white, grey and striped patterns. The barrels were installed in the open air for four months while their core temperature was measured continuously. Using thermography, the temperature distributions of the barrel surfaces were compared to those of living zebras. The sunlit zebra-striped barrels reproduced well the surface temperature characteristics of sunlit zebras. We found that there were no significant core temperature differences between the striped and grey barrels, even on many hot days, independent of the air temperature and wind speed. The average core temperature of the barrels increased as follows: white cattle, grey cattle, real zebra, artificial zebra, grey horse, black cattle. Consequently, we demonstrate that zebra-striped coats do not keep the body cooler than grey coats challenging the hypothesis of a thermoregulatory role of zebra stripes.”

Here’s a video news report about the zebra-stripe research:

The 2016 Ig Nobel Prize for physics was awarded to Gábor Horváth, Miklós Blahó, György Kriska, Ramón Hegedüs, Balázs Gerics, Róbert Farkas, Susanne Åkesson, Péter Malik, and Hansruedi Wildermuth, for discovering why white-haired horses are the most horsefly-proof horses, and for discovering why dragonflies are fatally attracted to black tombstones.

BONUS: RICHÁRD HEGYESHALMI gives the news study a quick study, writing in the Hungarian journal Index: “What Are the Zebra’s Stripes Good For?“