The old technique of judging people by examining their head bumps gets a new looking-at, in this study:

Phrenology was a nineteenth century endeavour to link personality traits with scalp morphology. It has been both influential and fiercely criticised, not least because of the assumption that scalp morphology can be informative of the underlying brain function. Here we test this idea empirically, rather than dismissing it out of hand. Whereas nineteenth century phrenologists had access to coarse measurement tools (digital technology then referring to fingers), we were able to re-examine phrenology using 21st century methods and thousands of subjects drawn from the largest neuroimaging study to date. High-quality structural MRI was used to quantify local scalp curvature….

In closing, we hope to have argued convincingly against the idea that local scalp curvature can be used to infer brain function in the healthy population. Given the thoroughness of our tests, it is unlikely that more scalp data would yield significant effects. It is true that further work might focus on the inner (rather than outer) curvature of the skull, perhaps formalising a virtual method for creating endocasts. In any case, we would advocate that future studies focus on the brain. 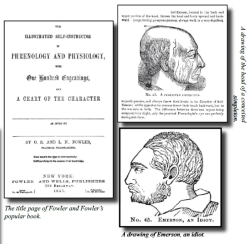 (Thanks to Ivan Alvarez for bringing this to our attention.)

BONUS: A special issue (volume 13, no. 4) of the Annals of Improbable Research: “Where in your head?“