Old rattlesnake research gains new bite, with the news reports of a man who decapitated a rattlesnake, and then was bitten by the detorsoed snake head [“Texas Man’s Near-Fatal Lesson: A Decapitated Snake Can Still Bite” — New York Times].

The most pertinently focussed study was published almost 20 years ago:

Klauber [Rattlesnakes: Their Habits, Life Histories, and Influence on Mankind, Lawrence M. Klauber, 2nd ed., Berkeley: University of California Press, 1972, pp. 341-349.] performed experiments showing that rattlesnake heads are dangerous for 20 to 60 minutes after decapitation. We prospectively collected data on patients admitted to our toxicology referral center for rattlesnake bites. Thirty-four patients were admitted for rattlesnake bites from June 1997 to April 1998; of these, five patients (14.7 percent) — all men between 20 and 48 years old — were bitten by snakes that had been fatally injured and were presumed to be dead…. 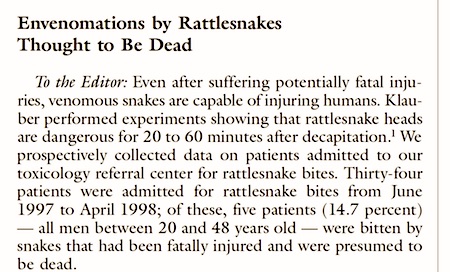 Patient 3 shot and then decapitated a rattlesnake. His right index finder was envenomated when he picked up the head. He developed a self-limited coagulopathy but ultimately required finger amputation because of local tissue destruction. Patient 4 was envenomated on his left ring finger and right index finger by a decapitated rattlesnake head that had been motionless for five minutes.

BONUS (related): The 1994 Ig Nobel Prize for medicine was awarded in two parts. First, to Patient X, formerly of the US Marine Corps, valiant victim of a venomous bite from his pet rattlesnake, for his determined use of electroshock therapy — at his own insistence, automobile sparkplug wires were attached to his lip, and the car engine revved to 3000 rpm for five minutes. Second, to Dr. Richard C. Dart of the Rocky Mountain Poison Center and Dr. Richard A. Gustafson of The University of Arizona Health Sciences Center, for their well-grounded medical report: “Failure of Electric Shock Treatment for Rattlesnake Envenomation.” [Published in Annals of Emergency Medicine, vol. 20, no. 6, June 1991, pp. 659-61.] Here is a snippet from the paper, showing Patient X after his life was saved: 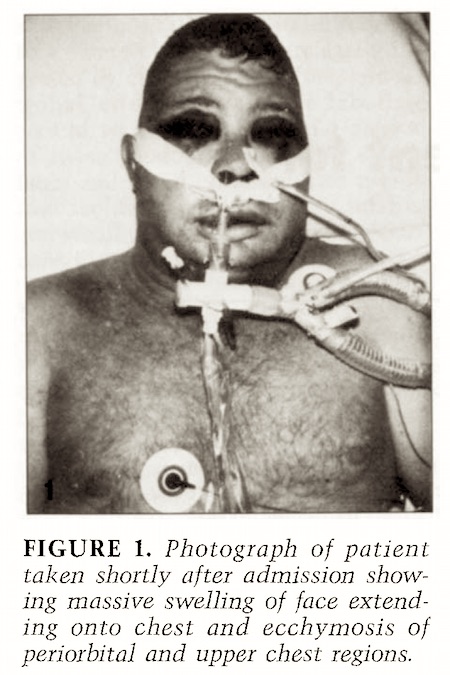