Colin Dickey, writing in Topic magazine, explores the history of the Ig Nobel Prize-winning poster “Penises of the Animal Kingdom” and its creator, Jim Knowlton. Dickey’s report bears the headline “The Penis Poster That Rubbed People the Wrong Way“:

“… Knowlton had been a graduate student at Columbia University, working on a PhD in particle physics, when he first concocted the idea for the poster. A colleague’s comment about how snakes have two penises, he later recalled, got him “thinking about penis trivia,” which soon “moved into the further realm of comparing.” He was 24 years old when he began selling the poster in 1985; after he completed his master’s, his academic funding was cut off. He moved out to Indiana, he later told a reporter, to continue selling his poster and start a rock band. The poster business was a one-man operation, and by then, Knowlton estimated, he was selling about 5,000 copies a year. 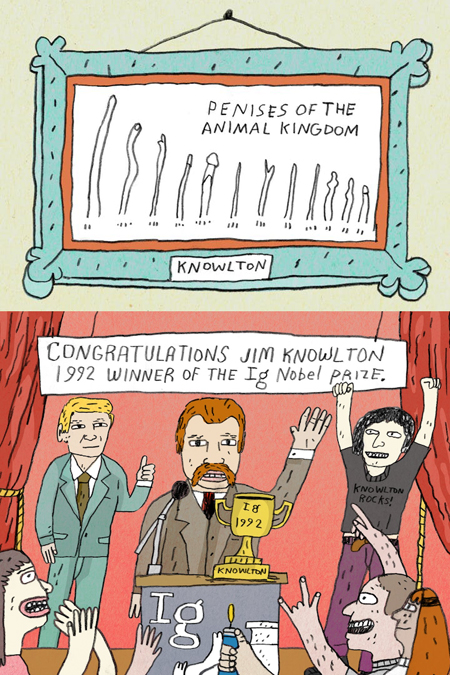 “In 1992, the poster’s notoriety earned it an Ig Nobel Prize—a set of parodic counterparts to the Nobel Prizes that are awarded each year by Marc Abrahams, editor of the science-humor magazine the Annals of Improbable Research. “The prizes are not intended to say that anything is bad or good,” Abrahams says. Instead, the sole criterion is: “Does it make people laugh and then think?” Few laureates have made work that has fit these criteria as well as Knowlton’s poster does….”