Today’s item in our Shape-Of-Things-to-Come series gets a detailed look in this research study:

“Penis morphology in a Burmese amber harvestman,” Jason A. Dunlop, Paul A. Selden, and Gonzalo Giribet, The Science of Nature, vol. 103, no. 11, February 2016. The authors, at Leibniz Institute for Evolution and Biodiversity Science, the University of Kansas, the Natural History Museum [London, UK], and Harvard University, report: 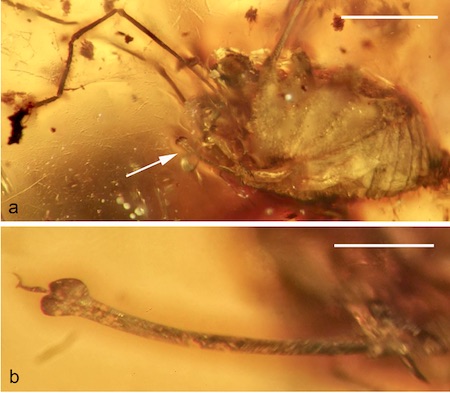 A unique specimen of the fossil harvestman Halitherses grimaldii (Arachnida: Opiliones) from the Cretaceous (ca. 99 Ma) Burmese amber of Myanmar reveals a fully extended penis. This is the first record of a male copulatory organ of this nature preserved in amber and is of special importance due to the age of the deposit. The penis has a slender, distally flattened truncus, a spatulate heart-shaped glans and a short distal stylus, twisted at the tip. In living harvestmen, the penis yields crucial characters for their systematics. Male genital morphology in H. grimaldii appears to be unique among the wider Dyspnoi clade to which this fossil belongs. The large eyes in the fossil differ markedly from other members of the subfamily Ortholasmatinae to which H. grimaldii was originally referred….

[The] unique structure of the penis seen here, and the probable lack of diaphanous teeth, present in all other extant non-acropsopilionid Dyspnoi, suggest that H. grimaldii represents a new, extinct family of large-eyed dyspnoid harvestmen, Halithersidae fam. nov.; a higher taxon in amber diagnosed here on both somatic and genital characters.

(Thanks to Tom Gill for bringing this to our attention.)