Is it daring to cross the street at a designated pedestrian crossing? If so, are women more daring than men—or vice versa? A study explores this question:

“Gender Differences in Use of a Pedestrian Crossing: An Observational Study in Newcastle upon Tyne,” Eryn O’Dowd and Thomas V. Pollet, Letters on Evolutionary Behavioral Science, vol. 9, no.1, 2018. The authors, at Northumbria University, UK, explain: 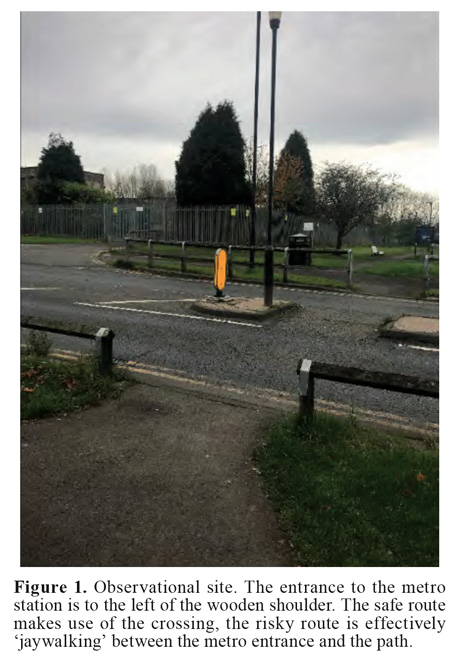 “Evolutionary psychologists have put forward that there are evolved differences in risk taking between men and women. Potentially, these also play out in every day behaviours, such as in traffic. We hypothesised that (perceived) gender would influence using a pedestrian crossing. In addition, we also explored if a contextual factor, presence of daylight, could modify risk taking behaviour. 558 pedestrians were directly observed and their use of a crossing near a Metro station in a large city in the North East of England was coded. Using logistic regression, we found evidence that women were more inclined than men to use the crossing. We found no evidence for a contextual effect of daylight or an interaction between daylight and gender on use of the crossing. We discuss the limitations and implications of this finding with reference to literature on risk taking.”

This passage in the paper gets at what the authors mean by “risk taking”:

“The entrance to the metro station is to the left of the wooden shoulder. The safe route makes use of the crossing, the risky route is effectively ‘jaywalking’ between the metro entrance and the path.”

(Thanks to Joseph H Lynch for bringing this to our attention.)