When it comes to eating in restaurants, some people like ambient music, some don’t like it, and others aren’t bothered one way or the other. But nevertheless, the question can be asked :- does the tempo of the music, measured in Beats Per Minute (BPM) affect customers’ Bites Per Minute (BPM) ?

A unique study, carried out by the Department of Psychology at Fairfield University, Connecticut, US, in 1985, set out to investigate. 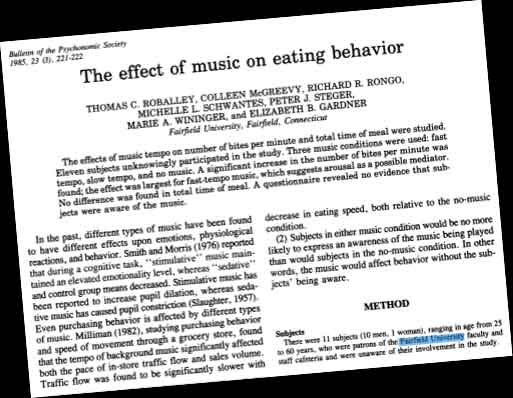 “The effects of music tempo on number of bites per minute and total time of meal were studied. Eleven subjects unknowingly participated in the study. Three music conditions were used: fast tempo, slow tempo, and no music. A significant increase in the number of bites per minute was found; the effect was largest for fast-tempo music, which suggests arousal as a possible mediator.”

Oddly perhaps, although uptempo music appeared to increase the number of Bites Per Minute, the total time of meals remained the same. Suggesting that restaurant owners who play fast music to their customers in the hope of increasing turnaround times might be disappointed.

The researchers also noted that :

“A questionnaire revealed no evidence that subjects were aware of the music.”