Looking at the clip above, did you spot any prominent non-verbal actions that might characterize ValleySpeak? A number of academic papers have examined the pronunciation aspects of so-called ValSpeak from California, few however, have focused on one of its characteristic features known as ‘Jaw Setting’ – in this case slack jaw, open mouth (see Fig. 1 below). 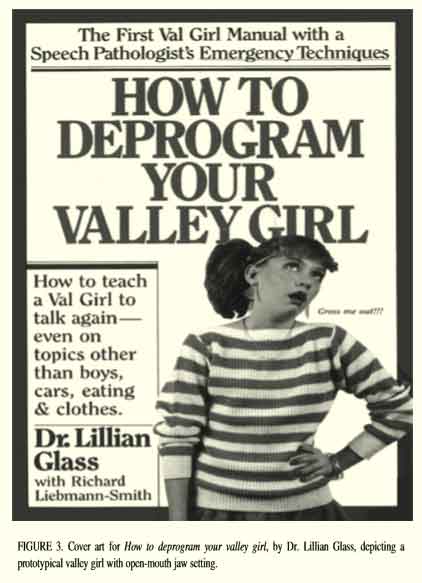 A 2017 paper in Language and Society, by Teresa Pratt and Annette D’Onofrio analysed a series of sketch comedy performances called The Californians, as performed on NBC’s late-night comedy show Saturday Night Live (SNL) looking for ‘metalinguistic characterizations’, and finding that open jaw settings were a prominent feature.

“The actors use these open jaw settings in both speaking and nonspeaking contexts, in contrast with performances in other skits, where their mouths are more frequently closed or only slightly open when not speaking. What’s more, they use these stylized jaw settings at moments of heightened attention to their facial organization (i.e. when the camera zooms to one actor’s face), which suggests an idiosyncrasy speciﬁc to the portrayal of these California characters. Visual analysis of the performances shows that jaw setting, just like hand gestures, body orientation, or gaze, can encode social meaning by virtue of the persona that is associated with it, as well as the linguistic and extralinguistic features with which it is packaged. We thus argue that these jaw settings are able to index California-ness by virtue of their existing link to California-speciﬁc social types (i.e. Valley Girl and Surfer Dude), and that these performances in turn contribute to the ongoing enregisterment of these jaw settings.”

Note: The book cited in the study ‘How to Deprogram Your Valley Girl’, by Dr Lillian Glass (‘Body Language Expert and Communications Consultant’) is available here.