It sometimes happens that a solution to a problem ends up creating a new problem. As an example, here’s a case in which the solution was a 70% alcohol-based gel in a wall-mounted dispenser in a hospital. The gel was intended to resolve so-called nosocomial problems associated with poor hand hygiene in hospitals. Unfortunately, a health care worker (HCW) removed a 100% polyester isolation gown shortly after using the sanitiser, causing a static electricity spark (at least 3000 volts) which then ignited the gel on her hands and arms : 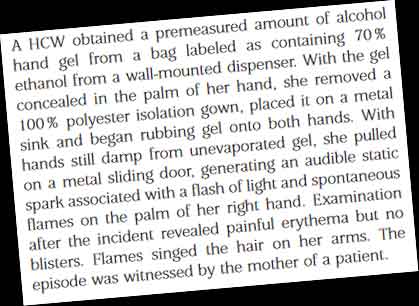 The report of the incident lead to the temporary removal of alcohol-based hand santisers in some hospitals, including those where  healthcare professionals had been found repetitively licking their fingers while reviewing hospital charts.