The belief that “statistics is like spaghetti” is a good starting point from which to savor this new study about statistics and spaghetti: 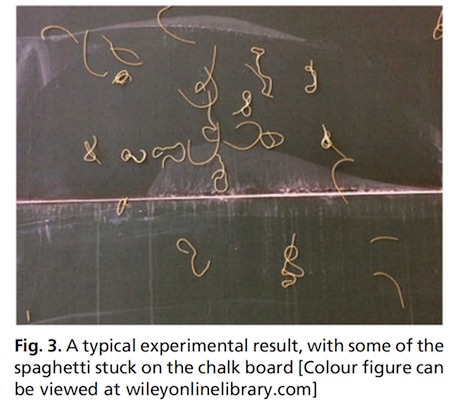 “The context we use is what we will refer to as the stick-on-the-wall spaghetti (SOWS) rule, a simple way of knowing whether spaghetti is cooked al dente (Italian for still firm), which is commonly accepted as a known fact (although unknown in Italy where pasta is simply tasted). Throw one piece of spaghetti (hereafter we will use the Italian word spaghetto) on the wall. If it sticks, the spaghetti is ready to be eaten. While the origin of this rule is unclear, its adoption into everyday life is pervasive and has led to a more general saying, ‘throw it against the wall to see what sticks’…. We now present examples for how the SOWS context can be used to teach more advanced statistical concepts.”