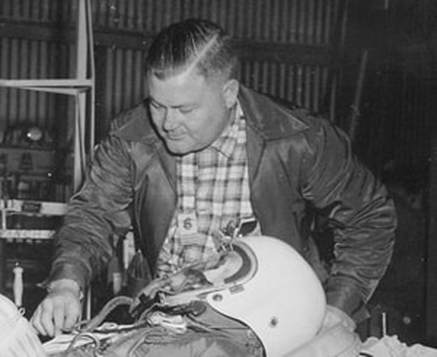 Murphy [pictured here] was posthumously awarded an Ig Nobel Prize, shared with two colleagues. The 2003 Ig Nobel Prize for engineering was awarded to:

The late John Paul Stapp, the late Edward A. Murphy, Jr., and George Nichols, for jointly giving birth in 1949 to Murphy’s Law, the basic engineering principle that “If there are two or more ways to do something, and one of those ways can result in a catastrophe, someone will do it” (or, in other words: “If anything can go wrong, it will”).

The Dayton Innovation Legacy website has a nice appreciation of Captain Murphy. They remark: “An engineer who spent a lifetime studying reliability and safety in order to prevent human error, Edward A. Murphy coined ‘Murphy’s Law’ with an offhand remark. While stationed at Wright-Patterson Air Force Base in the late 1940’s, Ed Murphy was a member of the Engineers Club of Dayton.”

The claim that Murphy himself coined the phrase “Murphy’s Law” is in dispute, which of course is in accord with Murphy’s Law.

George Nichols, leader of the project that gave birth to the phrase Murphy’s Law, contended that Murphy gets too much credit for Murphy’s Law. Details of the dispute are in Nick Spark’s report about the history of the name Murphy’s Law: “The Fastest Man on Earth” [published in the Annals of Improbable Research, vol. 9, no. 5, Sept/Oct 2003, and later expanded into book form]. The New York Times obituary of John Paul Stapp, for one, gives an account of Murphy’s role that is almost backwards from other versions of the history.

Here’s video of the project that, unplannedly, gave birth to the name “Murphy’s Law”:

BONUS INFO: The 1996 Ig Nobel Prize for physics also dealt with Murphy’s Law. That prize was awarded to

Robert Matthews of Aston University, England, for his studies of Murphy’s Law, and especially for demonstrating that toast often falls on the buttered side.