“Junk” is a new play, based on the life of the winner of the first Ig Nobel Economics Prize.

That Ig Nobel prize was awarded, in 1991, to Michael Milken, titan of Wall Street and father of the junk bond, to whom the world is indebted. 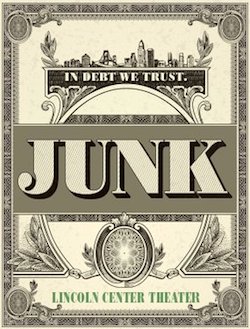 James B. Stewart reviewed the new play, for the New York Times, under the headline ” ‘Junk’ Mines the Milken Era for Truths That Resonate Now.” Stewart writes:

But make no mistake about it: “Junk” is about as close to reality as theater gets.

I should know: I’m the author of “Den of Thieves,” which chronicled the rise and fall of Michael Milken and his junk bond empire and the cast of characters that whirled around him. The author of “Junk,” Ayad Akhtar, has cited my book and “The Predators’ Ball,” Connie Bruck’s pathbreaking account of Mr. Milken’s heyday at Drexel Burnham Lambert, as works that influenced his play.