A baldness/dog/sleep/hair causal chain-of-events is the thrilling backbone to this new medical report.

“A 57-year-old woman who had mild atopic dermatitis was referred to our hospital for treatment of scalp hair loss that had rapidly expanded to the whole body…. In 2012, we belatedly discovered that she had kept a dog since 2002 and slept with her dog next to her every day. Laboratory tests revealed that serum value of the specific IgE antibody against dog’s dander was very high (2460 UA/mL; normal, <0.34 IU/mL). We persuaded the patient not to sleep next to her dog, and she followed the advice from May 2012. After three months of follow-up, the alopecia gradually improved (Fig. 1c, d). The hair growth was slow, but favorable (Fig. 1e, f). Additionally, her atopic dermatitis also got much better as the SCORAD score decreased from 21.0 to 5.3. Finally, two years and seven months later, her alopecia was completely in remission, including body hair (Fig. 1g, h). Laboratory tests showed that the specific IgE antibody of the dog’s dander was clearly lower than that at the first time (894 UA/mL in 2014).” 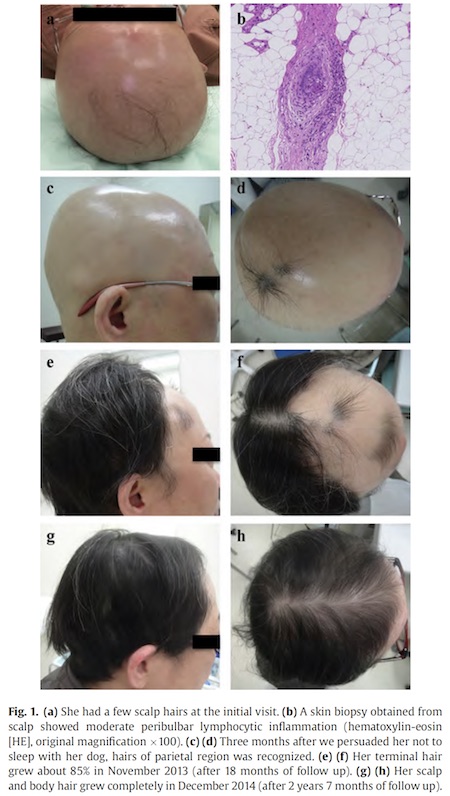