But Professor Cleese is by no means the only academic to have taken a keen interest in the enigmatic birds. Many have pondered the question of how wandering albatrosses spends weeks, even months, at sea without ever returning to land (in both senses of the word). Several research groups have attempted to provide answers – but there still isn’t complete agreement. Professor Philip L. Richardson of the Department of Physical Oceanography, Woods Hole Oceanographic Institution, for example, tends towards the ‘Gust Soaring’ model

“In gust soaring a bird exploits structures in the wind field, such as separated boundary layers and eddies in the lee of wave crests, to obtain energy by climbing headed upwind and descending headed downwind across a thin wind–shear layer.”

Source: How do albatrosses fly around the world without flapping their wings? Progress in Oceanography, 2010.

“the energy gain is achieved by a dynamic flight manoeuvre consisting of a continually repeated up-down curve with optimal adjustment to the wind.“

Despite the claim that the secret had been disclosed, a subsequent paper presented yet another viewpoint. Johannes Traugott, Anna Nesterova and Gottfried Sachs, writing in IEEE Spectrum, 2013, favoured the ‘Dynamic Soaring’ approach, in ‘The Nearly Effortless Flight of the Albatross’.

Back to Professor Richardson again : he’s now retired, but nonetheless is continuing to pursue the question – with the help of a robot albatross. See: Upwind dynamic soaring of albatrosses and UAV’s. in Progress in Oceanography, 130, 146-156. 2015. 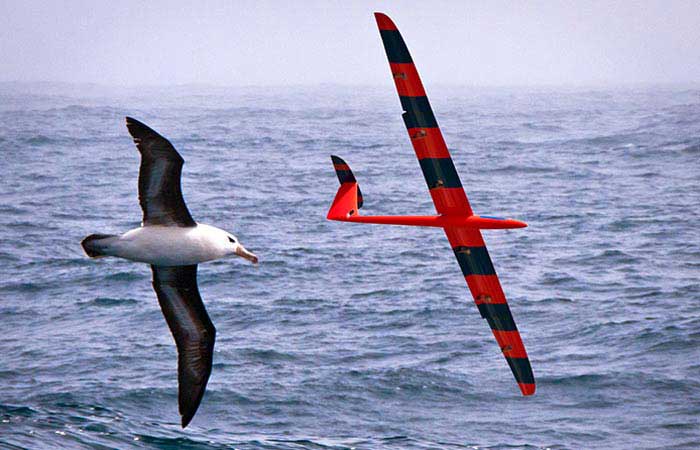 * Note : To be precise, Professor Cleese was not a professor at the time of the recording – or indeed this one [poss. nsfw]. He was, however, fully invested for this one.