“An Analysis of the Forces Required to Drag Sheep over Various Surfaces” is a research study that won the 2003 Ig Nobel Prize in physics for its co-authors — Jack Harvey, John Culvenor, Warren Payne, Steve Cowley, Michael Lawrance, David Stuart, and Robyn Williams, of Australia.

John Culvenor, one of the authors, has just boarded an airplane (that’s him, there, in the photo below!) that will take him from Australia to the United States, where he will return to the Ig Nobel Prize ceremony. 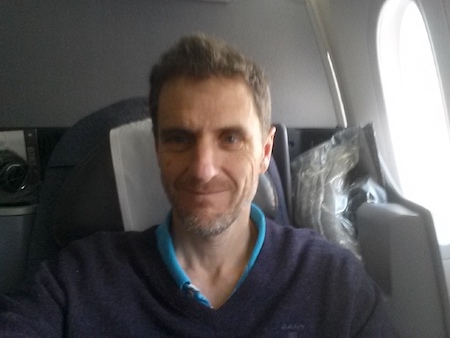 Dr. Culvenor will take a bow at the 27th First Annual Ig Nobel Prize ceremony, at Harvard, on Thursday evening, September 14. You can watch the ceremony webcast. There is some (though not much) mystery as to whether he will be accompanied by a sheep.

Two days later, on Saturday afternoon, September 16, He will give a brief talk, and answer questions, at the Ig Informal Lectures, at MIT. The new Ig Nobel Prize winners will each give brief talks there, too. And so will one other past Ig Nobel Prize winner: Thomas Thwaites, who shared the 2015 Ig Nobel Prize for biology, for creating prosthetic extensions of his limbs that allowed him to move in the manner of, and spend time roaming hills in the company of, goats.

You are invited to come to the lectures, and shake hands or hooves with these Ig Nobel Prize winners.