News reports say that Andre Geim (who won an Ig Nobel physics prize for using magnets to levitate a frog, and then won a Nobel physics prize for discovering how to obtain and study the virtually-two-dimensional form of carbon known as “graphene“) — discovered that a Chinese brassiere manufacturer is falsely claiming that he, Andre Geim, endorsed the power of their brassieres. 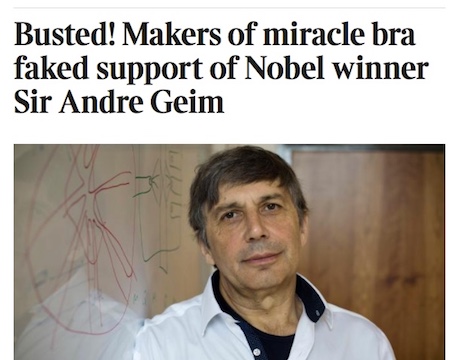 Graphene scientists are used to dealing with exciting claims. The material’s superconductivity could revolutionise electronics and its super-strength could transform aircraft construction. Few industries appear safe from disruption.

Even so Andre Geim, who won a Nobel prize for its discovery, was surprised to hear graphene underwear could renew sexual vigour and enlarge breasts. He was particularly surprised because, when he read about the claims, they were endorsed by one Professor Andre Geim, from the University of Manchester….. Shengquan insists underwear made of graphene boosts breast size and sex lives….

The South China Morning Post carries this headline on its report:

(Thanks to Davide Castelvecchi for bringing this to our attention.)

NOTE: So far as we are aware, the Shengquan bra is not connected in any way with the Emergency Bra (a brassiere that, in an emergency, can be quickly converted into a pair of protective face masks, one for the brassiere wearer and one to be given to some needy bystander.), whose inventor, Elena Bodnar, was awarded an Ig Nobel Prize for public health….