“All these papers were deliberately bad. They were created with the purpose of exposing exploitative publishing practices. That is, the works collected here were sting operations on predatory journals.” So says the introduction to the book Stinging the Predators: A collection of papers that should never have been published, assembled by Zen Faulkes. Falkes is a professor of biology at the University of Texas Rio Grande Valley. You can download the book, free.

That book includes the following papers, and follows them with some Faulkesian analysis of the situation that led people to write the papers, and led publishers to publish them: 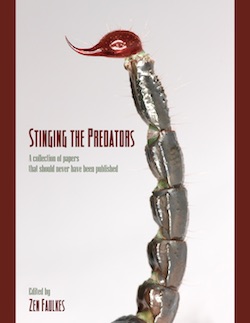 The blog that called predator (June 2009)

NOTE: Publication of the Sokal hoax paper led to the awarding of the 1996 Ig Nobel Prize for literature to the editors of the journal Social Text, for eagerly publishing research that they could not understand, that the author said was meaningless, and which claimed that reality does not exist.