UPDATE (November 29, 2019): We plan to resurrect the podcast, and to make new episodes!

UPDATE (mid-2017): In February 2017 the Improbable Research podcast moved, by invitation, from its original home (CBS Radio) to Scientific American. After we moved there, SciAm insisted that we change the podcast into something very different. We did, happily. Then SciAm declined to run more than one episode of the new, very different podcast. In a word: yikes. We are patiently looking for a good home for the podcast.

Here’s the first—and only—episode that ran at Scientific American: 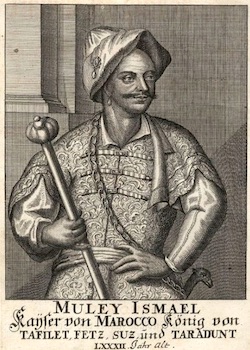 How Many Kids Can One Man Father in his Lifetime?

Every day was Father’s Day for Ismael the Bloodthirsty, the emperor of Morocco, who reportedly fathered 888 children. Ig Nobel Prize-winning biologist Lisa Oberzaucher tells why Moulay quite possibly had lots more than that. Recorded at Imperial College London.

PEOPLE IN THIS EPISODE

PREVIOUS EPISODES: Dip into descriptions of the previous Improbable Research podcast episodes! UPDATE: Some weeks after we moved the podcast to Scientific American, the old home base—CBS Radio—was sold, and our podcast archives (more than 100 episodes) there vanished. We do have all our original audio files, and intend to make the best of them available once we find a stable, good home for the podcast.