Monday June 5th, 2017 is the 22nd edition of Dead Duck Day. At exactly 17:55 h we will honor the mallard duck that became known to science as the first (documented) ‘victim’ of homosexual necrophilia in that species, and earned its discoverer (Kees Moeliker) the 2003 Ig Nobel Biology Prize.

Dead Duck Day also commemorates the billions of other birds that die(d) from colliding with glass buildings, and challenges people to find solutions to this global problem.

The event will include a review of this year’s (animal) necrophilia news: the world’s second officially homosexual necrophiliac duck will make his first posthumous public appearance. [Some people have been waiting 22 years for this moment.] 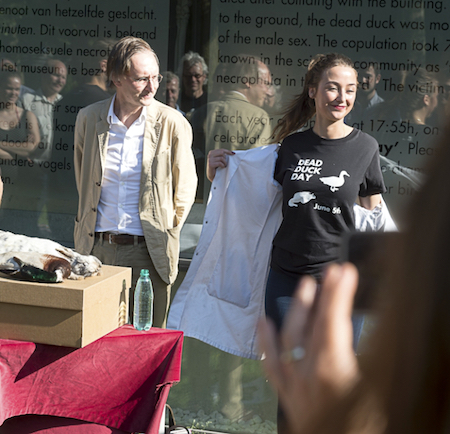