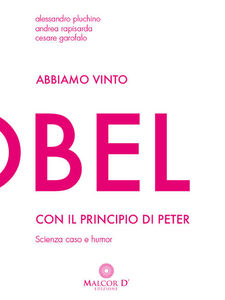 The Italian researchers who analyzed how the Peter Principle plays out, and who as a side-effect of that were awarded an Ig Nobel Prize, have a new book about their experiences. The book is called Abbiamo vinto l’Ig Nobel con il principio di Peter [“We won the Ig Nobel with the Peter Principle”], by Alessandro Pluchino, Andrea Rapisarda , and Cesare Garofalo, published by Malcor D’.

We will all celebrate the new book in a special show at the University of Catania, on Thursday, April 6. The show features: Marc Abrahams and Ig Nobel Prize winners Marina de Tommaso (measuring the relative pain people suffer while looking at an ugly painting, rather than a pretty painting, while being shot [in the hand] by a powerful laser beam), Elizabeth Oberzaucher (mathematical analysis of the man who fathered 888 children), and of course Cesare Garofalo, Alessandro Pluchino, and Andrea Rapisarda (organizations would become more efficient if they promoted people at random). 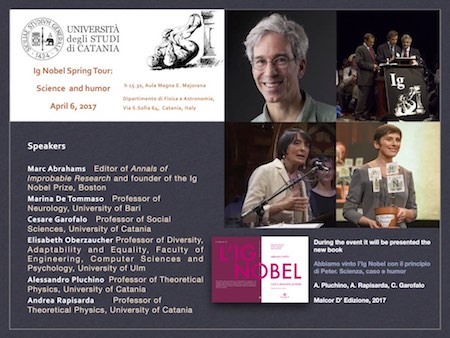 The show is a featured part of the Ig Nobel Spring EuroTour.