Psychologists, having been decorated (see below) for pursuing insights about why people sigh, now see neurobiologists tailing after them.

A press release earlier this year from UCLA announces: “UCLA and Stanford researchers pinpoint origin of sighing reflex in the brain“. The press release also contains a body of text, which contains this explanation: “Sighing appears to be regulated by the fewest number of neurons we have seen linked to a fundamental human behavior,” explained Jack Feldman, a professor of neurobiology at the David Geffen School of Medicine at UCLA and a member of the UCLA Brain Research Institute. “One of the holy grails in neuroscience is figuring out how the brain controls behavior. Our finding gives us insights into mechanisms that may underlie much more complex behaviors.” Details are in a study published in the journal Nature, called “The peptidergic control circuit for sighing”, by Peng Li, Wiktor A. Janczewski, Kevin Yackle, Kaiwen Kam, Silvia Pagliardini, Mark A. Krasnow and Jack L. Feldman. 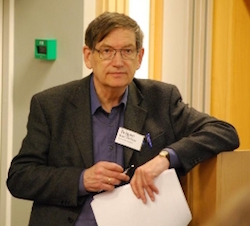 The 2011 Ig Nobel Prize for psychology was awarded to Karl Halvor Teigen [pictured here] of the University of Oslo, for trying to understand why, in everyday life, people sigh. (Teigen published details in the paper “Is a Sigh ‘Just a Sigh’? — Sighs as Emotional Signals and Responses to a Difficult Task,” Karl Halvor Teigen, Scandinavian Journal of Psychology, vol. 49, no. 1, 2008, pp. 49–57.)