Bernard Vonnegut, that most surprising atmospheric scientist, gets appreciated in an Italian-language essay called “Ice Numbers“, by Franco Bagnoli of the University of Florence, published in Ciencia y Cultura. Here’s a machine translation of bits of Bagnoli’s essay:

At the end of 2016, at the Institute of Complex Systems of the CNR in Florence, Italy, a new solid phase of water was discovered: ice XVII….

The news, and the discussion workshops that followed, reminded me of one of my favorite novels by writer Kurt Vonnegut [which involves a new phase of water, called “ice-nine”]… Who could have given Vonnegut the idea of ​​this new phase of water? Probably his brother. Bernard Vonnegut, who was a scientist of the atmosphere. He discovered that silver iodide can be used as a nucleating agent to induce rainfall. In the clouds, the water is in the form of small supercooled drops….

Bernard Vonnegut became famous in 1997, the year of his death, for having won the Ig Nobel Prize in meteorology for a 1975 article entitled “Chicken Plucking as Measure of Tornado Wind Speed“. 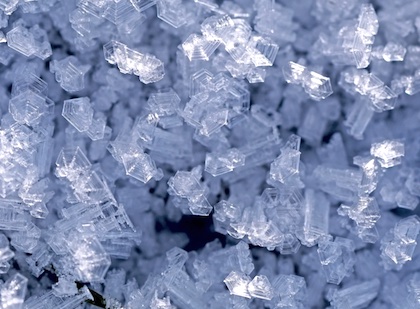