The 1996 Ig Nobel Prize for literature was awarded to the editors of the journal Social Text, for eagerly publishing research that they could not understand, that the author said was meaningless, and which claimed that reality does not exist. The “research” paper was “Transgressing the Boundaries: Toward a Transformative Hermeneutics of Quantum Gravity,” written by Alan Sokal, published in Social Text in Spring/Summer 1996, pp. 217-252. Ig Nobel Prizes, of course, are for achievements that make people laugh, then think.

The publication of that intentionally nonsensical paper — and the fervent defense, by the editors who published it, of the paper’s nonexistent meaning — became known as “The Sokal Hoax”. Now, in January 2017, Jennifer Ruark in the Chronicle of Higher Education takes a look back at what happened, and what the some of key people have to say about it now: 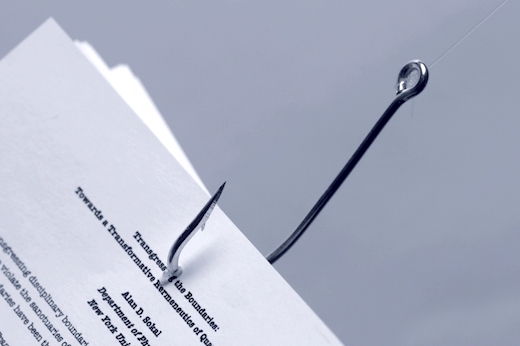 “… Sokal revealed that he didn’t believe a word of what he’d written. It was all a big joke, but one motivated by a serious intention: to expose the sloppiness, absurd relativism, and intellectual arrogance of ‘certain precincts of the academic humanities.’ …”