The Science Friday radio program will, for the 25th year, broadcast a specially edited version of the year’s Ig Nobel ceremony. In America, listening to the Ig on ScieFri on the day after Thanksgiving is a tradition. It’s the country’s biggest shared-experience science event.

When: Friday, November 25, 2016
Where: Public radio (in the USA), and on the internet
How/where to listen: The Science Friday website lists radio stations and broadcast times. Many of those stations also livestream on the net.

Start time: In most places, the Ig Nobel ceremony will be HOUR TWO of the two-hour-long Science Friday program. (In the Boston area, though, it will be HOUR ONE on WBUR-FM 90.9, beginning at 2 pm.) Do check your local station to be sure about their start time.

It’s fun to hear the golden voice of SciFri host Ira Flatow set the scene. And for us (the organizers of the ceremony) its both fun and excruciating, in a different way each year, to see how the SciFri editors manage to almost magically squeeze a 90-minute-long event down into a radio hour that’s 47 minutes (of content) long.

Please gather the family around the Bunsen burner, and join us in listening to the Ig, on Friday, on SciFri. You might want to do, with your family at home, what the audience at the ceremony does in Harvard University’s Sanders Theatre: make paper and fly airplanes, directed strategically and with safety foremost in mind. Here’s a photo of a few of the 1100 people in the the audience in Sanders Theatre: 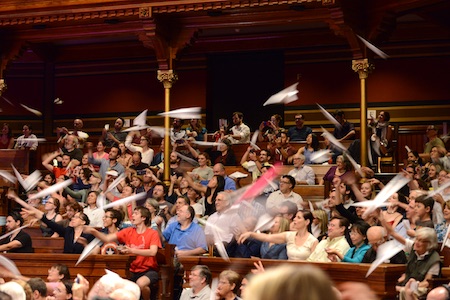