The authors, at Université Paris-Saclay, France and at House of Bird Research, Denmark, explain:

“We hypothesized that hunted individuals differing from survivors by having better ability to distinguish between dangerous humans and other human beings would be at a selective advantage. We tested whether shot individual birds had smaller brains than survivors, under the assumption that individuals with larger brains had superior escape ability. We used a large database on birds from Denmark to test whether getting shot was predicted by brain mass, while controlling statistically for the potentially confounding effects of age, sex, body mass and body condition. Analyses based on all species, or only species that were hunted, while controlling for differences in sampling effort in random effects models, showed consistently that shot individuals had smaller brains than survivors.” 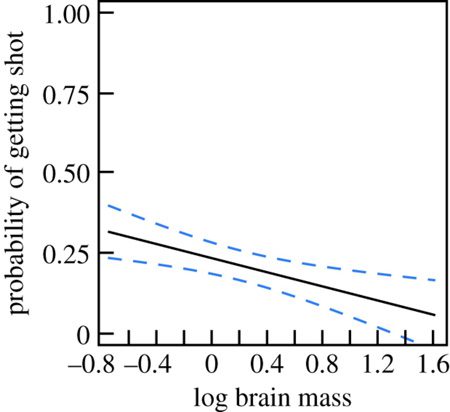 The researchers also report on their own ethics: “This study required no ethical permit, because all data were retrieved from the professional activities of J.E., a professional taxidermist. All specimens were dead when he received them, and they were supplied by his customers.”

(Thanks to Berry Pinshow for bringing this to our attention.)

BONUS: A January, 2007 report, by Brandan Borrell, in The Scientist Magazine, about the lead author of this study: