“Most people don’t lie very often but a few people lie a lot.” That’s one of the insights honored by this year’s Ig Nobel Prize for psychology. The Vanderbilt University Research newsletter explains: 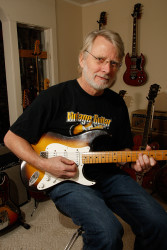 Centennial Professor of Psychology Gordon Logan [pictured here] is co-author of a paper on deception and lying that has received the 2016 Ig Nobel Prize for psychology.

According to the award website, “Ig Nobel Prizes honor achievements that make people LAUGH, and then THINK. The prizes are intended to celebrate the unusual, honor the imaginative — and spur people’s interest in science, medicine, and technology.”

This year’s awards were announced at the 26th First Annual Ig Nobel Prize ceremony held on Sept. 22 at Harvard University. The prizes are given by the Improbable Research group, which publishes a magazine, books, videos, a newsletter, newspaper column, podcast and blog.

“I don’t know why they selected this for the Ig Nobel prize,” Logan said. “It’s supposed to make you laugh and then think. Maybe the laughing is ‘why would anyone study lying?’ and the thinking is ‘because lying presents interesting cognitive challenges that liars must overcome.’”

The paper “From junior to senior Pinocchio: A cross-sectional lifespan investigation of deception” appeared in the Sept. 2015 issue of the journal Acta Psychologica. Logan’s co-authors were Evelyne Debey, Maarten De Schryver, Kristina Suchotzki and Bruno Verschuere at Ghent University in Belgium. The paper reports the results of a study of age-related differences in lying proficiency and lying frequency….

The researchers conclusion, which probably won’t come as a great surprise to parents, is that lying accuracy and proficiency improves throughout childhood, peaks in young adults and then decreases during adulthood. They also found that most people don’t lie very often but a few people lie a lot….