Birds, not carrying weapons of any sort, jousted by special arrangement of three scientists in Australia.

Details are in the study: “Strategies for Pre-Emptive Mid-Air Collision Avoidance in Budgerigars,” Ingo Schiffner, Tristan Perez, and Mandyam V. Srinivasan, PLoS ONE, 11(9): e0162435. The authors, at the University of Queensland, Australia, report:

Trajectories of birds flying towards each other in a tunnel were recorded using high speed video cameras. Analysis and modelling of the data suggest two simple strategies for collision avoidance: (a) each bird veers to its right and (b) each bird changes its altitude relative to the other bird according to a preset preference. Both strategies suggest simple rules by which collisions can be avoided in head-on encounters by two agents… 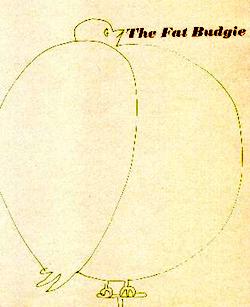 Two birds were released from the opposite ends of the tunnel, at an initial separation of either 5 meters or 10 meters from each other…. Over the course of 4 days, we tested a total of 7 pairs, consisting of 10 individual birds, and recorded a total of 102 flights. No collisions were observed in the entire study.

(Thanks to Nicki Rapoli for bringing this to our attention.)

The new study does not cite the collision-avoidance research that led to the awarding of the 2005 Ig Nobel Peace Prize to Claire Rind and Peter Simmons of Newcastle University, in the U.K., for electrically monitoring the activity of a brain cell in a locust while that locust was watching selected highlights from the movie “Star Wars.”

BONUS (not much related): A seemingly inhuman reading of a John Lennon poem about a Budgerigar: