Robert Harington and his son survived being in the audience at the 2016 Ig Nobel Prize ceremony. (Harington is Associate Executive Director, Publishing at the American Mathematical Society.) He wrote about the experience, for The Scholarly Kitchen. He says:

Let’s first set the stage. Each year, there is a theme, and this year it was “Time”. Of course this led to the some 1100 strong audience to shout “woohoo” at every mention of the word “time”, or “second” etc. My son got to exercise his vocal cords. The whole thing kicked off with paper airplane throwing and you can see how this works in the video. I have to say that the tantalizingly efficient guardian of paper airplane throwing, Nicole Sharp (creator of FYFD, the world’s most popular web site about fluid dynamics) was remarkable. In addition to the prizes themselves, given out by real Nobel Prizewinners — this years crop included Dudley Herschbach (Nobel Prize for chemistry 1986), Eric Maskin (Nobel prize for Economics 2007) and Rich Roberts (Nobel Prize for Physiology/Medicine 1993), there were mini-lectures in which a leading expert in a field gave a 24-second talk on their topic, followed by a 7-word summary. There was an opera, games, and live scientific experiments.

The Biology prize was shared between Charles Foster of the University of Oxford and Thomas Thwaites. Charles Foster lived in the wild as if he were an animal – at different times a badger, a deer, a fox and a bird. Thomas Thwaites told us that he had enough of being a human and created prosthetic limbs that allowed him to move like a goat and spend time living among goats in the Alps. The Medicine prize was…

See for yourself. Here’s video of the entire ceremony:

This photo, taken by Mike Benveniste, shows the new Ig Nobel Prize winners, the Nobel laureates, the cast of the new opera, and other Ignitaries gathered at ceremony’s end for a pointless photo opportunity: 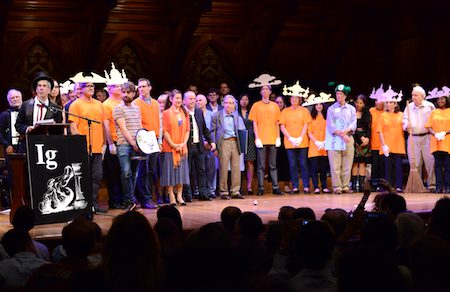 Lavish details will be included in this year’s special Ig Nobel issue (vol. 22, no. 6, November/December 2016) of the Annals of Improbable Research.