If slime moulds can help plan the Tokyo rail network, might they also successfully apply their ’embodied intelligence’ to rationalise motorway network topology? Specifically French motorway network topology? This is the question asked – and answered – in a new research study scheduled for publication in the journal Environment and Planning B Planning and Design entitled: ‘Evaluation of French motorway network in relation to slime mould transport networks’ The photos below show slime mould explorations (in Petri dishes) where oat flakes are used to represent the major French urban centres. 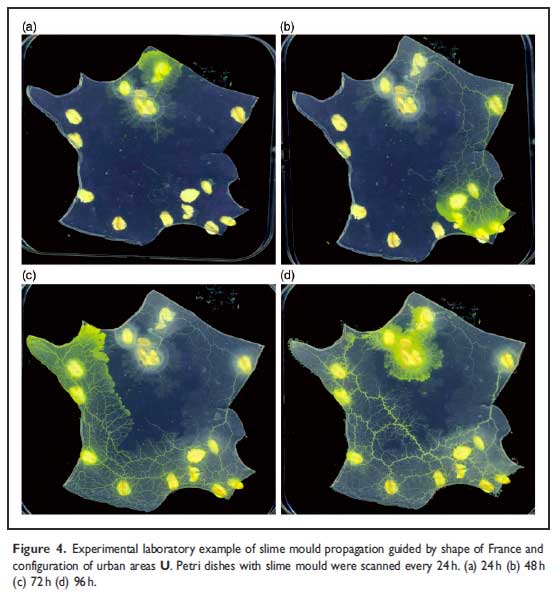 “We demonstrate that despite the apparent complexity of the challenge, Physarum can successfully apply its embodied intelligence to rationalise the motorway topology. We also demonstrate that such calculations prove challenging in the face of significant obstacles such as, mountainous terrain and may account for the missing route between Nice, Grenoble, Avignon and Lyon.”

“For a further study, it would be interesting to experiment whether a spider would construct a similar network structure given the same boundary constraints as topographically delineated at the French frontiers.”