Fame has been newly measured by Eric Schulman, continuing the series of studies he began in 1999. We are famously proud to publish the new paper here, as famously as we were to publish the earlier papers. Read the paper here, below, and if you like, also download it in PDF form: MEASURING FAME-part2-2016-09.

MEASURING FAME QUANTITATIVELY. V.WHO‘S THE MOST FAMOUS OF THEM ALL? (PART 2)

In this fifth paper on measuring fame quantitatively, we summarize the changes in fame over the past 15 years and identify the person we believe to be the most famous person in the world at the present time. Our previous research (Schulman 1999, Schulman and Boissier 2001, Schulman 2006, and Schulman 2009) showed that many people are famous to some extent and that Internet search engines can measure the exact fame of such people by comparing the number of search engine hits for the person to the number of search engine hits for a universal standard of fame.

Table 1 shows our classification of the 49 longitudinal study subjects since January 2001. 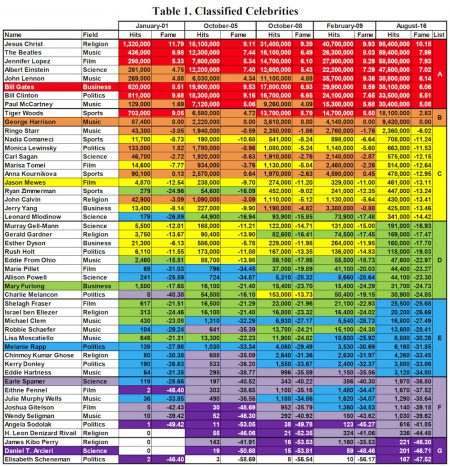 Table 1 provides a wealth of data worthy of comment. For example, the Lennon Theorem (1966) stated that The Beatles were “more popular than Jesus,” but this has not been true in any of the fame observations since 2001. A determination of whether the Lennon Theorem was true in 1966 is beyond the scope of this paper, but we can state that The Beatles are not currently more popular than Cristiano Ronaldo, who is 1.6 dBHa more famous. Another item of note is that the percentage of ‘B’ List celebrities in the study has decreased dramatically, from 18% in 2005 to just 4% in 2016. This is even more remarkable because of the fact that there must, by definition, be at least one ‘B’ List celebrity in the study (George Harrison). Of the nine ‘B’ List celebrities from 2005, one (John Lennon) has become an ‘A’ List celebrity and six have become ‘C’ List celebrities. The sole ‘H’ List celebrity from 2005 to 2009, Elisabeth Scheneman, is now a Chief of Staff at the Pennsylvania Department of Health and has become a ‘G’ List celebrity.

Donald Trump is the most famous person in the world, but he is not as famous as Barack Obama was in 2009.