“Promise and Ontological Ambiguity in the In vitro Meat Imagescape: From Laboratory Myotubes to the Cultured Burger,” Neil Stephens and Martin Ruivenkamp, Science as Culture, vol. 25, no. 3, 2016.  The authors, at Brunel University London, Middlesex, UK, and University of Applied Sciences, Nijmegen, The Netherlands, explain: 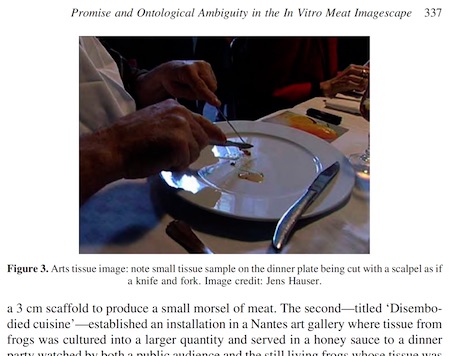 “In vitro meat (IVM), also known as cultured meat, involves growing cells into muscle tissue to be eaten as food. The technology had its most high-profile moment in 2013 when a cultured burger was cooked and tasted in a press conference. Images of the burger featured in the international media and were circulated across the Internet. These images—literally marks on a two-dimensional surface—do important work in establishing what IVM is and what it can do. A combination of visual semiotics and narrative analysis shows that images of IVM afford readings of their story that are co-created by the viewer. Before the cultured burger, during 2011, images of IVM fell into four distinct categories: cell images, tissue images, flowcharts, and meat in a dish images. The narrative infrastructure of each image type affords different interpretations of what IVM can accomplish and what it is. The 2013 cultured burger images both draw upon and depart from these image types in an attempt to present IVM as a normal food stuff, and as ‘matter in place’ when placed on the plate.”

(Thanks to Tom Gill for bringing this to our attention.)